Follow Your Money: Who Gets It, Who Spends It, Where Does It Go? by Kevin Sylvester and Michael Hlinka 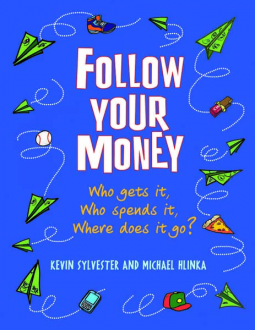 Follow Your Money:
Who Gets It, Who Spends It, Where Does It Go?
Authors: Kevin Sylvester and Michael Hlinka
Illustrator: Kevin Sylvester
Publisher: Annick Press
Publication Date: February 4, 2013
Buy Now on Amazon.com
Buy Now on Amazon.ca
The idea behind the book is solid: Why do things cost what they cost? If an item costs a dollar to make but sells for thirty, who gets the other twenty-nine dollars? This thought experiment is repeated a few dozen times in the book with items the authors must have figured kids would be interested in, like sneakers and music. Unfortunately, it mostly feels like a repeated thought experiment, since there's no reason to think that the numbers they use are anything but theoretical. The first example is a "10 dollar cardboard box," for instance. Ten dollars for a cardboard box??

Throughout the book the numbers they give for what things cost all seem randomly chosen and not at all accurate. The breakdown of a metro transit bus ticket, for example, includes things like fuel costs, worker salaries, bus maintenance, etc., but it does not acknowledge that virtually no transit system in the world is sustained entirely by the cost of a rider ticket. (This is something I know about. There was a transit strike in my city last year and I did a lot of research on transit systems in Canada and the rest of the world, trying to figure out what the costs were in other cities. The overwhelming majority of transit systems only get about half of their funding from rider tickets and the other half from government support.)

It may sound like I'm being picky, but the book is presented as if the numbers ARE solid facts, as if the reader could take that information and break down the exact costs of various items (how much goes to production, distribution, profit, etc.). But without the benefit of accuracy (which I don't believe this book has...or if so, it's a gross oversimplification at best), it's really just a long list of examples and not much else.

It's a shame, though, because it IS a good idea for a book. But this book could have been better.


Disclaimer: I received a digital galley of this book free from the publisher from NetGalley. I was not obliged to write a favourable review, or even any review at all. The opinions expressed are strictly my own.