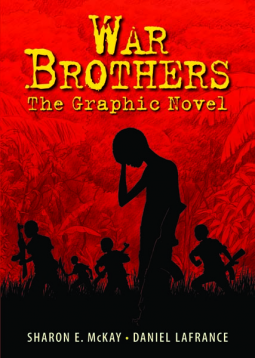 
Author: Sharon E. McKay
Illustrator: Daniel Lafrance
Publisher: Annick Press
Publication Date: February 7, 2013
Buy Now on Amazon.com
Buy Now on Amazon.ca
I have not read Sharon McKay's 2008 YA novel, War Brothers, so I can't compare the graphic novel version to the original. Like the original, War Brothers--The Graphic Novel tells the story of child soldiers in Joseph Kony's Lord's Resistance Army in Uganda, this time with illustrations by Daniel Lafrance to add a new dimension to the characters.

I discussed this book with my partner Mike (he reads a lot of comic books and graphic novels). Here's what he had to say:

"A pretty good story.  A little safe – only one of the main characters has to kill, and they manage to escape together.  There’s even a little deus ex machina in the jungle. Not bad for younger readers – it wades into the horror of child soldiers and the LRA.  It’s fiction, and it feels that way.  Weird to say, but feels a bit “Feel good story”, even given the topic.  The feeling of guilt and belief that everyone was afraid of them as killers was well done."

He also mentioned how much he liked the fact that the illustrations were somewhere between typical graphic novel images and children's book illustrations. They were almost cute, or they would have been if the subject matter hadn't been so horrifying. It added to the feeling that these children's childhoods were being stolen from them by being forced into children's armies.
Disclaimer: I received a digital galley of this book free from the publisher from NetGalley. I was not obliged to write a favourable review, or even any review at all. The opinions expressed are strictly my own.